Do Sagittarius and Taurus Get Along?

Learn if Taurus traits are the best match for Sagittarius. 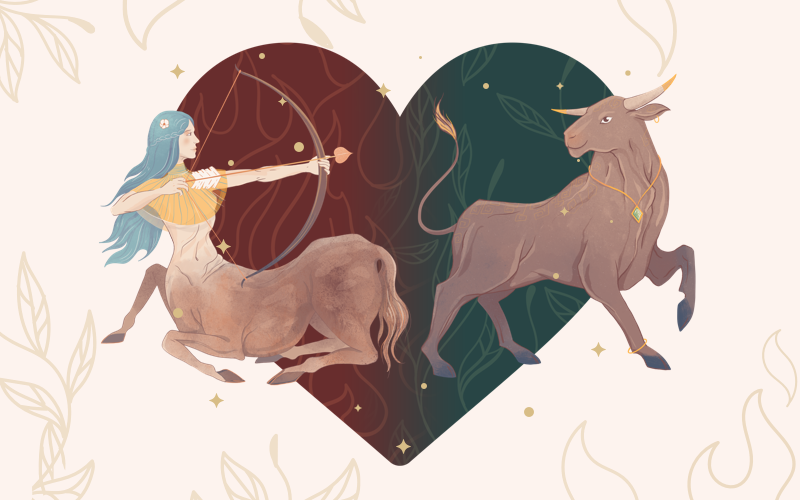 Hi Sagittarius! Those born under your sun sign revel in adventure. Luckily, the Archer’s connection to the Ninth House of the Higher Mind helps them think on their feet. It also doesn’t hurt that their ruling planet, Jupiter, grants them a little extra luck. But can a nomadic Sag settle down long enough to achieve Sagittarius and Taurus compatibility?

“Romance between the Archer and Bull tends to be fleeting. Proximity, physical attraction, and shared interests may bring them together, but their different temperaments can drive them apart.”

If love is an astrological buffet, then Sagittarius wants to sample a little of every dish. Taurus, on the other hand, nibbles on a few entrees until they find the one dish they adore. The food metaphor is apt for both signs. Venus-ruled Taurus and Jupiter-ruled Sagittarius both revel in pleasure of all kinds, including sex and food. While they’re together, they will delight each other with their shared tastes. However, Taurus likes to use romance as a springboard into a deeper relationship.

Meanwhile, Sag may prefer to keep things light and flirty. Even a friendship between these two sun signs can be challenging. Sagittarius is highly competitive, striving to prove their superiority. In turn, Taurus stubbornly refuses to engage in games of one-upmanship. When Taurus prefers to take their time, impatient Sagittarius might mistake their deliberation for laziness. Are Sagittarius and Taurus a Good Match?

The success of the Sag-Taurus couple depends a lot on financial security—more so than many other astrological pairings. The stable Bull fares much better in a relationship with a free-spirited Archer when they’re not struggling for money.

“Some Archers—especially younger ones—can look at a lack of savings as another challenge or adventure. Their optimism may convince them that things will change for the better soon. On the other hand, Bulls would prefer to be in the black year-round.”

The core of Taurus’ soul feels shaken by a lack of funds. Unless one or both of you has a lucrative career, or is independently wealthy, the relationship may end up on the rocks. One of the archetypes of Sagittarius is the judge and many Archers enter law. Whether or not you’re actually an attorney, you’re probably a pro when it comes to proving a point. Even so, don’t expect to win an argument against Taurus. The Bull will stubbornly adhere to their opinion regardless of how compelling your case may be. You may feel confident that you won in terms of evidence presented, but Taurus will retain their belief that they’re right. The more you prosecute your case, the more adamantly the Bull will dig in their heels. Sagittarius and Taurus Compatibility: The key to a successful relationship

Especially at the beginning, Archer-Bull romantic matches can seem like orchid flowers—fragile and requiring constant attention and effort. Once the two of you are past the honeymoon phase, you’ll have to face the day-to-day reality of your differences. Taurus seeks security while Sag wants adventure. If the two of them share interests and beliefs, they might have a successful partnership. Compromise and communication are essential to making this pairing last.

“Another hurdle Sagittarius and Taurus may face is the question of commitment. Romantic Taurus wants to cocoon with their chosen partner. Flirty Sagittarius prefers to keep their options open.”

The Bull and the Archer must engage in serious discussion to find a solution that makes both happy. Is this relationship or marriage worth the effort? Sometimes relationships that require the most effort are also the most rewarding. The effort the two of you put into the relationship means both of you grow and evolve. An Everclear horoscope compatibility reading offers insight into the inner workings of your Sag-Taurus union using your birth charts and unique characteristics. An advisor will give you the truth about whether your Sagittarian intelligence combined with Taurus’ persistence can make it work.