Do Leo and Sagittarius Get Along?

See if Leo and Sagittarius are the best love match. 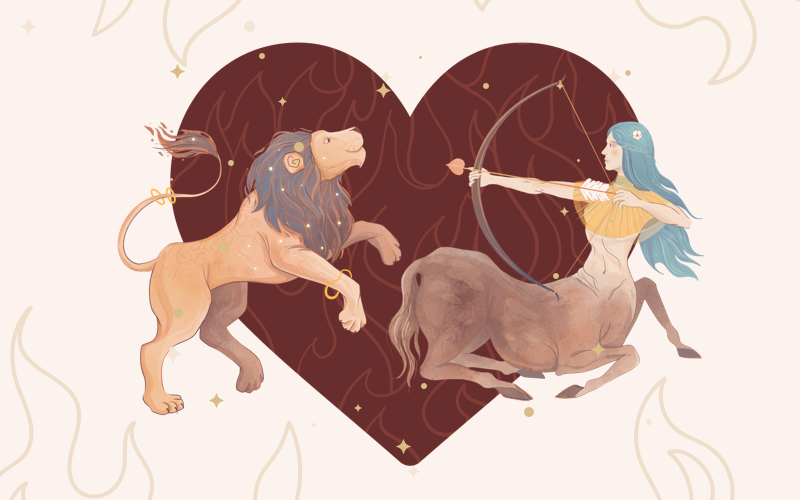 Hi Leo! The Lion embodies the spirit of a fire sign. They’re warm, cheerful, generous, and incredibly passionate. Those born under the Leo sun are natural leaders. They have an ability to naturally attract people who are more than willing to follow them. After all, their ruling planet is the center of the universe—the Sun. Will the Archer come into your orbit in a horoscope match between Leo and Sagittarius?

“Leo is self-confident and determined. They have an uncanny ability to unite diverse groups of people towards a common goal. The sociable Lion also has a plethora of friends.”

They owe many of these characteristics to their astrological home, the Fifth House of Creativity. It bestows Leo with a knack for self-expression, drama, and humor. They love to entertain, whether at a party or on a stage.

Sagittarius is a fellow fire sign. They’re known to be enthusiastic, extroverted, and optimistic individuals in the pursuit of the unknown. As a member of the Ninth House of the Higher Mind, they have an open mind that is always willing to learn. The Archer’s curiosity and expansive mind leads them to being a frequent traveler. Sag has a fiery passion for exploration. It follows that Sagittarius seeks freedom in all that they do. This allows them to expand their horizons, both mentally and physically. However, their need for freedom means that the Archer may take off at a moment’s notice. For Sagittarius’ relationships to thrive they may need to be more reliable.

Are Leo and Sagittarius a Good Match?

A friendship between these two fire signs can lead to an incredibly warm and wonderful bond. Both Leo and Sagittarius live life to its fullest and seek out others who do the same. When they’re together, the Lion and Archer can have never ending fun.

“Their similarities enable them to have a good time. Meanwhile, their differences enrich their relationship. Although Sag is a passionate fire sign, they’re also more cerebral than their fellow elementals”

As a later sign in the zodiac cycle, Sag can share their innate wisdom with Leo. In turn, Leo can showcase the merits of loyalty and generosity—two traits that can escape the more flighty Sagittarius. These two signs are bound to start dating sooner or later. Their fun, flirty way of communicating can quickly ignite into a sexy romance. You’ll most likely enjoy natural ease and compatibility from the start of your relationship. There won’t be too much jealousy between you, since both of you signs understand what it’s like to enjoy popularity. As long as neither of you strays too far away, you’ll be confident and secure.

However, the independent Sagittarius may become resentful if they’re expected to continuously revolve around the Lion. If they begin to feel trapped, they may give into their wanderlust. Leo will be wounded when the Archer strays. They may even think of their flight as a betrayal. Ultimately, it will be difficult to restore trust since Leo values loyalty so highly.

Leo and Sagittarius Compatibility: The key to a successful relationship

Two fires may fuel—or consume—each other. Whether your natural compatibility makes you both shine brighter is up to you and your Archer. As in all relationships and marriages, this will come down to open communication.

“While you both prefer to keep things fun and romantic, you’ll need to discuss boundaries sooner or later. Sometimes, the Lion can be clingy.”

Rather than becoming distant, the Archer should outline their need for space. Meanwhile, the Lion should define their views on loyalty to their nomadic partner. For Leo and Sagittarius to overcome these hurdles, they’ll need to focus less on their mutual heat and more on their inherent differences. After all, no couple is perfectly aligned. Yet it may take this couple a while to embrace their imperfections. Fortunately, seeking an outside perspective can help. Everclear’s astrological advisors can provide insights into the Leo-Sagittarius relationship dynamic. These advisors will be able to look at your birth charts and illuminate all of the benefits that come along with embracing your differences.